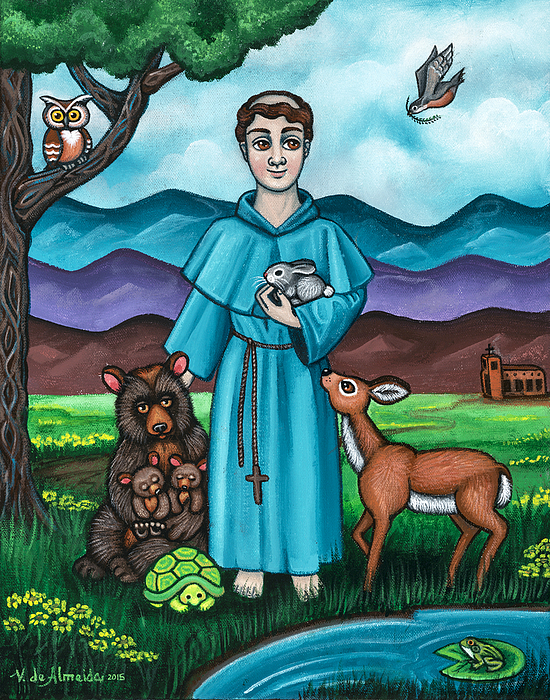 I am Francis Yoga Mat

Our premium yoga mats are 24" wide x 72" tall x 0.25" thick and made from natural rubber with a blended microfiber top surface.   The top of the mat has the image printed on it, and the back is solid black with textured dimples for better floor grip.

Wash with a damp cloth and air dry.

Art provides an opportunity for kaleidoscopic thinking. Each time we shift the lens of our perceptions, we gain new perspectives — and new opportunities for innovation. CONGRATULATIONS ON YOUR RECENT SALE OF AN WONDERFUL WORK!

It looks like it could be on the cover of a children's bible story! Nice work Victoria! :)C

Saint Francis of Assisi (1182-1226) Saint Francis was born in 1182 in Assisi, Italy. He was the son of a wealthy cloth merchant. He spent his youth frivolously, spending money and attending parties with nobles One day, A mysterious voice spoke to him and told him he must change his life and serve God. He walked away from his former life, rejecting all material wealth and privilege. Soon, he felt himself called to preach simplicity of living and poverty. He emphasized the importance of relying on God�s will as opposed to attaining worldly goods. Large numbers of people began following his way of life and they formed a small commune on the outskirts of town. They worked to care for the poor and the sick. A new Order of the church was formed, known today as the Franciscan Order. He died on October 3, 1226. St. Francis is the patron saint of animals and the environment. Victoria de Almeida All rights reserved 2009 Santa Fe, New Mexico (505) 660-0063 Website: www.VictoriaDeAlmeida.com