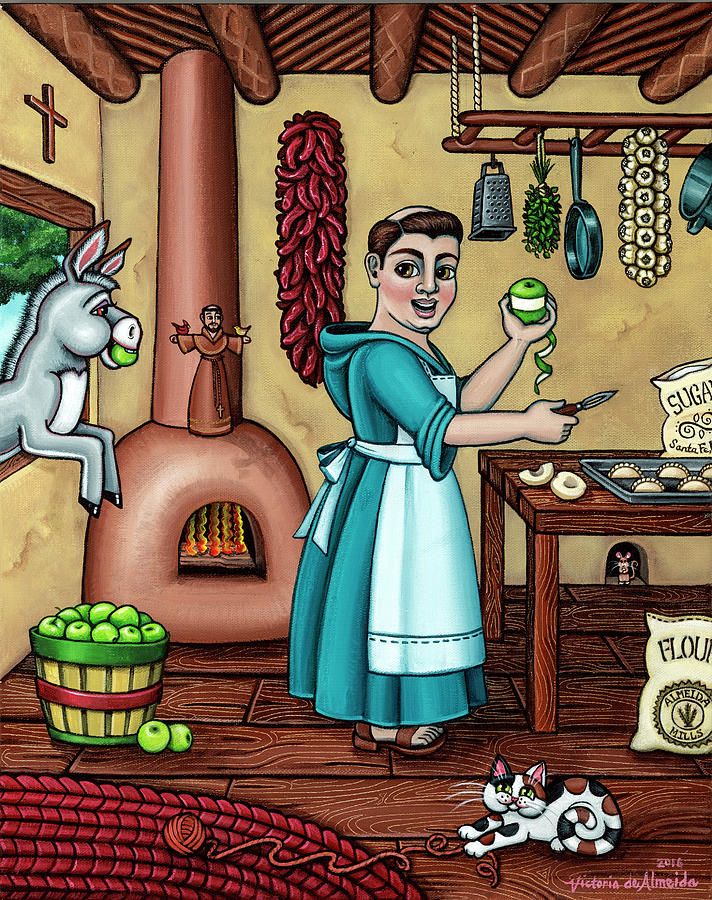 Burritos In The Kitchen

Original - Not For Sale

This piece is not for sale.   Please feel free to contact the artist directly regarding this or other pieces.

Burritos In The Kitchen

Burrito's In The Kitchen
Pascual Bailon (1540-1592) was born, in May of 1540 in Torre Hermosa, Aragon, Spain. In his youth he was a sheep herder and was often seen praying in the pastures. His faith led him to the Franciscan monastery in Loreto. Because he was uneducated, the friars would only accept him to do menial tasks such as cooking. His devotion to his faith and kindness of heart to the poor made him beloved by all. San Pascual is the patron saint of cooks and the kitchen. He is especially loved in New Mexico. I have depicted him here preparing apple empanadas a traditional New Mexican fruit pie. It seems a burrito has decided to help himself to Pascal's apple bushel. San Pascual is traditionally depicted cooking in the kitchen with a cat to keep the mouse out. This cat seems to be more interested in the ball of string than the little brown mouse in the hole in the wall!
San Pascual is my favorite saint to paint because of my love and memories of my Grandma Reynalda Almeida. She lived in a little adobe casita near Canyon Road in Santa Fe, New Mexico. The heart of my Grandma's home beat in the kitchen. As we drove to her home down the little hill street of Camino Sin Nombre, my heart fluttered in anticipation. She always had a pot simmering on the stove and open arms ready for her children and grandchildren. The rich smell of red chile would permeate the house while my Grandma would push my small hands into a floury bowl of tortilla dough. It is with her in mind and in my heart that I paint San Pascual.

Beautiful work Victoria! So pleased to hear of your sale.

Congratulations on your sale!

Congratulations on your lovely sale!